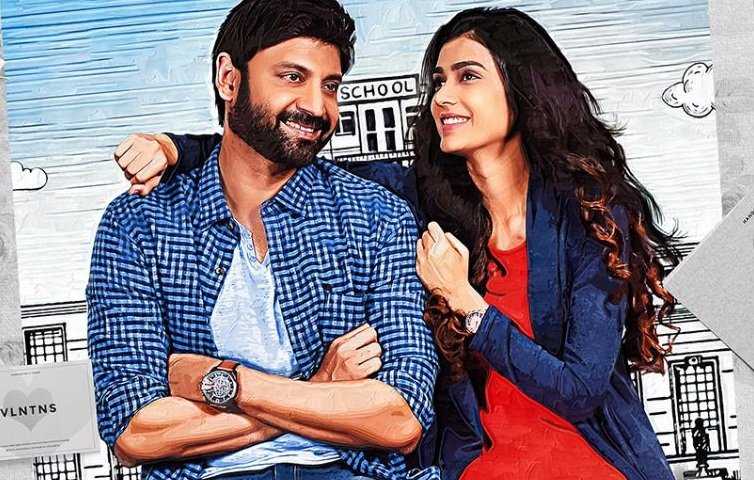 Director : Gowtam Tinnanuri
Producer : Rahul Yadav Nakka
Music Director : Shravan Bharadwaj
Starring : Sumanth, Aakanksha Singh
Malli Raava is one film which has created a good buzz from the day its appealing teaser was released. Starring Sumanth, this film has released all over today. Lets see how it is.
Story:-
The story of the film is based on the lives of Karthick(Sumanth) and Anjali who fall in love during their teenage days. Whenever they get close to each other some problem or the other keeps creeping up between them. Rest of the story is as to what problems do the lovers face during different time zones of 1999, 2012 and 2017 and how they reunite during the end.
Plus Points:-
One of the biggest assets of the film is the impressive screenplay. Credit should go to director Gowtham who narrated the film in a very interesting manner. The film goes back and forth in time and the way the problems and love scenes have been incorporated in the narration is beautiful.
Sumanth gives his career-best performance. With this film, it is clearly proved that Sumanth is a gifted actor who can act well provided the filmmakers extract performance from him. The way he has carried his role and showcased his emotions in a subtle manner is worth appreciation

Heroine Akanksha Singh makes a striking debut and is pretty good as Anjali. Acting wise, she has done well in her complex role and will surely be an actress to watch out for. The comedy featuring Sumanth and his colleagues evokes good laughs here and there. Yet another major asset of the film is the way things have been kept realistic. There is no melodrama or over the top scenes in the film which look forced.
Minus Points:-
Malli Raava takes its own sweet time to unleash its proceedings. Even though the films duration is short, in many areas you find the movie to be quite slow and dull.
The love story featuring the lear pair during their teenage has been stretched a bit too much. The film is a serious romantic drama and all those who are expecting some entertaining romantic episodes and fun will be disappointed.
Technical Aspects:-
Production values of the film are top notch as the film is showcased in a simple yet realistic manner. Music by Shravan Bhardwaj is pretty impressive as all the songs move the story forward. The background score is also very good and makes things quite interesting. Dialogues need a special mention as they have been written with a lot of depth. Camera work is also good as the difference in the time zones has been showcased effectively.
Verdict:-
Malli Raava is a subtle love story which has some beautiful moments throughout. The biggest asset of the film is that it is quite simple and realistic. Impressive performances by the lead pair and interesting screenplay are basic assets. The film is clearly aimed at the multiplex audience and all those who look for sheer entertainment might find it a bit dull and slow. But for the rest, it is a captivating romantic drama which and ends up as a good watch this weekend.
Rating:3/5